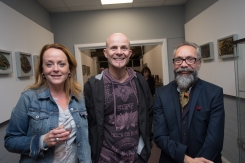 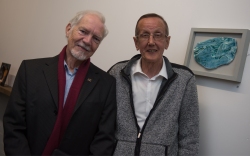 A group of Staffordshire artists have set up their own micro-pottery to produce ceramic art and will hold their first exhibition at the Spode Museum and Heritage Centre, in association with Gallery One-One-Six,  from Saturday September 23rd 2017.

“Some of our work involves using found objects such as pieces of metal, packaging or tree bark to create images and patterns. Its modern art made from little pieces of Stoke” said Dave Harper

TONY WILD
Born in Stoke-on-Trent, Tony Wild studied at the Burslem School of Art in the 1950s. One of his tutors was the artist Arthur Berry. It was there that he also met fellow member of the Penkhull Artist Potters Association Mike Cain.
Mike and Tony have collaborated several times over the years including a joint exhibition of paintings in Newcastle-under-Lyme in the 1960s.
Tony spent much of his career teaching Fine Art at Staffordshire University and History of Art at Keele University.
He has exhibited widely in the UK including at the Serpentine Gallery in London. He has recently had a one man exhibition at the Stoke-on-Trent Museum and Art Gallery.
His work is held in numerous personal collections in the UK and overseas and by the British Council.

Mike Cain was born and brought up in Stoke-on-Trent and attended the Burslem School of Art alongside Tony Wild.
He worked extensively in the pottery industry and was head of the screen printing department at what was then Staffordshire Polytechnic.
He studied Fine Art at Coventry Polytechnic where he specialised in sculpture. For the last twenty years of his career Mike was an Art and ceramics teacher in secondary schools in Derbyshire and North Staffordshire.
He has held various exhibitions and his paintings are in collections both in the UK and Europe. He is the founder of the Penkhull Artist Potters Association.

DAVE HARPER
Dave studied Art and Design at Derby College of Higher Education and then at North Staffordshire Polytechnic in Stoke-on-Trent.
His first love was sculpture and he planned to study ‘Fine Art’ at degree level, but he was seduced by photography and documentary film making.
His career over the last thirty years has been based around multi-media communication. He worked for many years as a radio and television journalist. More recently he’s worked as a university lecturer where he specialised in photo-journalism and film making.
Dave has painted and produced mixed media art works since his days at art school in the 1980s, but only started working professionally when he joined the Penkhull Artist Potters Association. This is his first public exhibition.

Centre Space Arts, we are an independent artist lead gallery based in Stoke on Trent. We exhibit a vastly diverse range of art by artists from the Midlands and beyond. View more posts